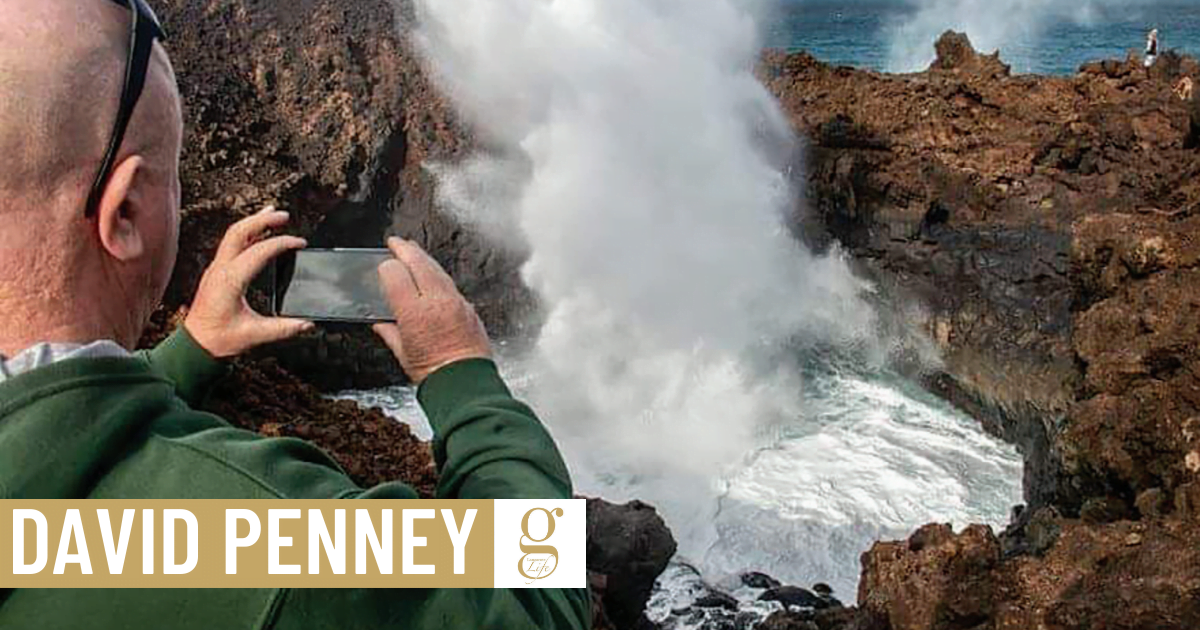 Terrain: A little rough in places, but non-challenging. Linear walk.

Public transport: The closest stop is in the village of Guatiza. 3 kms away.

We park our cars in the car-park area here and six friends of four different nationalities, accompanied by César the dog, set off south along the coastal track to a place of interest known by the locals as “The Dragons Nostrils”. Here you will find a pair of blow holes which have been created by nature. These are best seen between low tide and high tide as when the waves come in the water shoots up through the “nostrils” and makes a roaring sound.

We now double back to the car park area and explore the picturesque little black sand beach (only accessible around low tide) and the sheltered bay which the locals frequent, especially on summer weekends.

We continue our walk northwards towards the wee village of Los Cocoteros, sticking to the coastal track. Very soon after we leave the car parking area we arrive at Las Salinas, the salt flats, where we stop off and I explain the basic system of how they produce the crystallised rock salt.

When I first visited these salt flats over 11 years ago they were being operated by a local family and there was a huge mountain of rock salt that was often mistaken for a drift of snow.

The molinos (windmills) used to pump the water up from the ocean and it was then distributed over the salt flats, the sea water would gradually evaporate and begin to form a crust on the surface, then the workers would use a squeegee to scrape the surface and make the tiny mounds of salt along the sides.

Unfortunately, this is not operating commercially now due to market trends changing and people choosing to buy refined salt from the supermarkets (which in my opinion isn’t as good for you as I prefer to cook with the natural stuff). Nowadays, an old guy uses a pump to bring the water on to the salt pans, and if you speak to him nicely he will “unofficially” sell you a bag of fresh rock salt for a couple of euros from his old shack.

Just as you leave las Salinas you can witness some amazing displays as the ocean collides with the solidified lava, and you will see huge splashes of water which sometimes come up on to the path.

Next we head towards the village and we keep over by the sea wall which was built and reinforced about 10 years ago. Here you will often see locals cooling down in the man-made lagoon area as the sea water comes over the top of the sea wall at high tide to replenish the lagoon.

Keeping the ocean on our right we walk along Calle El Clavo and pick up the dirt track again heading north.

After a fairly short walk we arrive at the only property around, called Buen Retiro, which is an ideal place to escape from the rat race and get in tune with a hidden retreat on the edge of the ocean.

Here it is important to stick to the authorised path which takes you to the left of the property, the correct path is well indicated and is a public right of way (camino publico).

Within a few minutes of walking on the rough track you come across a spectacular and naturally created area called Cueva del Agua. In the summer I have seen some of the local kids diving down into the ocean and if you look you will see the ropes which have been put in place to allow them to pull themselves back out again. Although I am known as a bit of an adventurous dare devil, I have never attempted this adrenalin-boosting activity, as I can imagine you can easily be smashed against the rocks like a rag doll.

We spent a long time here as we were all mesmerised by sheer power of Mother Nature. We took many photos and several video recordings on slow motion and laughed soooooo many times when one of us got soaked from the spray, which created a beautiful rainbow each time.

We were all in our own little bubble, but after an enjoyable time spent being away from the stuff which is going on in the rest of the world, we decided to make our way back to the cars.

A couple of us drove on to the next village of Mala to enjoy a nice cold drink and to be entertained by some live music.