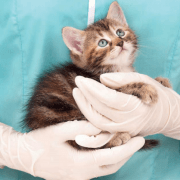 Lanzarote Vet Jane Burke recalls a punishment that led to a great friendship, and stresses the importance of lifelong learning.

I failed third year at veterinary college. Well, the truth is that I passed the summer exams but was failed for attitude (as a female I was a barely tolerated minority and expected to be seen and not heard; as an outspoken animal activist I was a pariah).

As a result, they had to hold a special meeting to provide the government with a reasonable excuse for wasting the £40,000-plus already spent on my education. So, I armed myself with lies about financial difficulties, personal problems including an (imaginary) miscarriage, medical and consequential nervous problems and the tremendous strain on a delicate female’s psychology. I grovelled with the required deferential attitude and tearfully offered disingenuous promises to reduce my antisocial attitudes and behaviours (e.g. calling the press about cruelty within the college and in farming).

They, for their part, had lists of my misdemeanors and read out the somewhat graphic poem I had written rather than complete the September exams I had been made to sit despite clear pass marks in all subjects in June.

I was sent out of the room whilst they debated my fate and, on my return, they seemed smugly satisfied and I thought my ambitions were done for. However, they offered me the opportunity to repeat the year on the conditions that I would work a further two months, in the main holidays, in abattoirs of their choice; and that throughout term times I would spend five hours every morning in the pathology laboratories working on post-mortem examinations. I kept my eyes on the floor, accepted the terms unconditionally and thanked them for their kindness and understanding! I was asked to repeat my response and did so, tearfully, through gritted teeth. My tears were of gratitude as well as frustration because, despite their deliberate cruelty, I kept the chance to be a vet!

I started my repeat year on my 21st birthday. Because I should have been starting the clinical years, I had been assigned a clinical tutor and was instructed to present myself to him before starting work in the pathology labs. ¨Mr Derek Lewis¨ turned out to be the new Clinical Dean, head surgeon and in charge of the small animal hospital.

I loved him from our first meeting. He told me he was nervous because his only previous female tutee had committed suicide. He held a copy of my interview with the probate committee. He flicked his long fringe back and searched my face with kind concern. I told him that I had lied from start to finish because, as much as I hated cruelty, I really wanted to qualify as a vet. He blinked with his infamous bespectacled confusion. Then he got up and shook my hand and said we would make the best of friends. And we did.

I won’t dwell on my time watching the holocaust of gentle creatures that is our meat and dairy industry, but the path labs became my passion. It was like CSI for vets. I could access infinite laboratory
investigations to facilitate “cause of death”. And these creatures, at least, were in no pain. So I took them apart and learnt where every bone fitted, every blood vessel and nerve ran, how every organ interrelated to every other. My topographical knowledge soared and my boss soon left me to get on alone every morning. After the briefest of hand-overs he would leave for the squash courts, returning only occasionally at the end of the morning to look over and sign the completed reports.

I found the work deeply fascinating as well as educating. I did, from time to time, have to call him for advice and I called my tutor regularly. He was equally fascinated and would come to visit and watch in his coffee breaks. The blessings of those mornings were even more special because, whilst designed as punishment, they were to grant me a superb surgical advantage and to forge a lasting bond with Derek Lewis that would open many doors I couldn’t have hoped for and certainly didn’t deserve. I asked him once why he was so kind to me, and he explained he felt his position condemned him largely to sycophantic conversation and shallow acquaintance, neither of which either of us believed I was capable of.

And whilst it was to prove a double-edged sword (other members of staff and students resented what was, without question, preferential treatment), I am forever indebted to his tutelage and kindness. Most vet students are lucky to have performed a couple of supervised routine surgical procedures before qualification. I was given the senior surgeon’s operating lists in final year and often stayed in the house surgeon’s flat in the small animal hospital. (the house surgeon and I are still good friends, though she is sadly housebound with arthritis in Wales these days).

I felt there was no end to learning those days, the curve only getting steeper when I left university. And I think it is our duty as professionals to keep learning.

Change with the times

For example, we are presently facing unprecedented problems with an explosion of cats, particularly feral cats. Since the earliest days of veterinary medicine, the advice has been to neuter between 5-9! months. Initially, perhaps, antiquated anesthetics were too crude to be safe for tiny kittens. Partly too, vets’ surgical equipment and/or abilities in the 40s and 50s were inadequate to operate on kittens . In the 60s and 70s other forces came into play: fully-equipped veterinary facilities are incredibly expensive to run and the revenue from neutered animals is at least 30 percent less than from un-neutered ones. But a great deal of the resistance to operate earlier is just because change is challenging.

Every single one of many extensive studies undertaken in Europe, the USA and Canada, all demonstrate the same result: There are indeed some possible disadvantages to a cat’s wellbeing due to being neutered, but all possible disadvantages from being spayed are more likely and more serious if the operation takes place after 12 weeks (3 months) of age.

I have done so very many of these operations , and my experience is that the surgery is simpler, safer, faster and less stressful for kittens at this younger age. More importantly: early- neutered kittens DON’T GET PREGNANT.

I hope to keep learning# to keep changing and adapting for the benefit of my patients, my family and the world in which I leave them. Hence my amazing solar panels with special accommodations so that my operating room remains safe from power cuts (thank you Colin Roach-Casares).

And the world is changing too, slowly but surely. Many shops and restaurants are slowly increasing their vegan options , many people give time and expertise in their struggles to look after abandoned and abused animals as well as those suffering from the dreadful financial troubles of these Covid times.

Let’s raise a glass of cold, clear water to that new world, and check our pets’ bowls are filled with the same.

The September Boom
Scroll to top