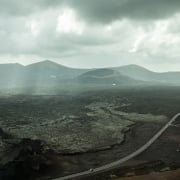 It doesn’t rain often on Lanzarote, but this is the time of year when those showers are at their likeliest. Here’s how to pass the time when the heavens open.

At the moment Lanzarote is undergoing an extended dry period, with no really heavy rainfall for well over a year. That great news for holiday makers, but the island’s farmers will be praying for rain after last year’s crops suffered from drought.

When it does rain on Lanzarote, it rarely does so for long. Light showers are the main type of rain, but much heavier downfalls can also happen. Whatever type of rain, you probably won’t be spending much time on the beach or by the pool, so here are a few other bright ideas for a wet day.

A trip to either of César Manrique’s homes in Tahiche or Haría will open your eyes to the creative mind of the “father of modern Lanzarote”, but there are many more museums to discover on the island.

Find out about the island’s piratical history at the Castillo de Santa Bárbara overlooking the old town of Teguise, or head into Teguise itself and discover the impressive Palacio Spínola; check out aeronautical history at the Airport Museum, step back in time at the Tanit ethnological museum or learn about wine culture at El Grifo’s Wine Museum. There’s even a small museum on La Graciosa!

Arty types can admire a fine collection of modern art at the Castillo de San José or catch the exhibitions in the El Almacén arts centre in Arrecife, but there are several more galleries dotted all over the island from Playa Blanca to Haría.

There are covered shopping centres all over Lanzarote, and many others where you’ll only ever have to scurry a few metres in the rain. A rainy day provides the perfect opportunity for a spot of retail therapy, allowing you to window-shop and try things on for ages.

Have a swim in an indoor pool or book a long, luxurious spa session at one of the island’s hotels. Once you’re finished you’ll be so blissed out you won’t care about the rain!

More active types can book a squash court, work out at a gym, try the bowling alleys at Deiland or Costa Teguise or head to a Canarian wrestling tournament, a basketball game or a five-a-side football game.

Some of Lanzarote’s established tourist attractions are unaffected by the rain, or even enhanced by it. The Cueva de los Verdes, for example, is underground, where there’s no rainfall at any time, so the only chance you’ll get wet is on the short walk from the carpark.

Timanfaya is also well worth seeing in the rain, as the stark volcanic landscape is punctuated by plumes of steam from where the rainfall is vapourised by hotspots. Views from the Mirador del Rio can also be spectacular during showers.

For photographers and sightseers, rainy, showery days offer much sharper, clearer views than fine days when there’s usually a blurry haze on the horizon. However don’t tackle anything too steep if there’s a chance of a shower.

Swimming is also a sensual pleasure in the rain, an unforgettable experience as millions of raindrops splash into the sea around you. Once you’re in the water, you’re not likely to get any wetter, and it’s something you’ll remember for a long time. Don’t take a dip during heavy rain, though – not only is it often accompanied by stormy weather; it also washes pollution into the water.

The Right Bowlful
Scroll to top