A Spanish/Portuguese research team has discovered evidence of massive prehistoric mega-tsunamis on Lanzarote, Tenerife and Gran Canaria. They believe the gigantic waves were caused by immense ancient landslides, when flanks of islands collapsed into the sea. 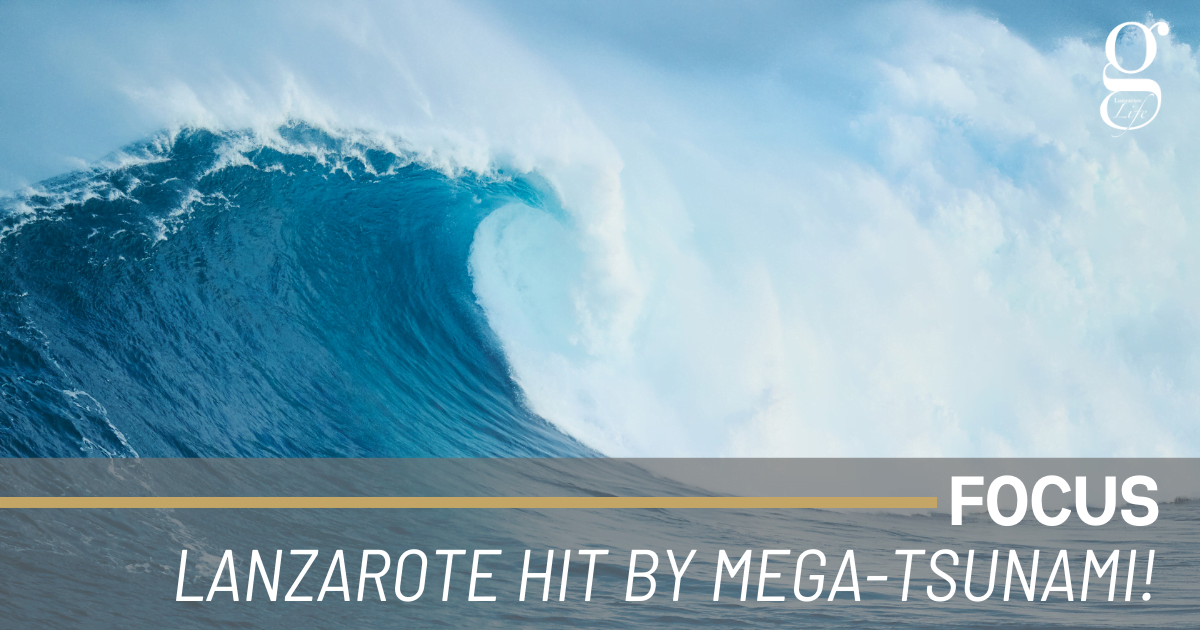 The research team, led by Mercedes Ferrer, of Spain’s Geological and Mining Institute (IGME), and Luis González de Vallejo, Geological Risk director at the Canarian Volcano Institute, claim that deposits found in the Lanzarote area of Piedra Alta, on the coast between Playa Blanca and Janubio, show that a gigantic tsunami may have hit the island around 150,000 years ago.

The team analysed massive deposits of fossilized seashells and marine sediments located 15 to 21 metres above current sea level at Piedra Alta. These deposits were originally thought to be due to the land rising through volcanic action, but the mixture of deep-water and shallow-water species suggests a more violent process, leading to the current theory that tsunamis dragged up immense amounts of the seabed and deposited them inland.

The sea level in the Pleistocene era, when the tsunami occurred, was around 20 to 100 metres lower than it is at present, meaning that the tsunami that hit Lanzarote is estimated at 125 metres high.

The team also discovered evidence of even bigger tsunamis in the Agaete region of Gran Canaria and at Teno and Isla Baja in Tenerife. They believe these tsunamis were likely to have been caused by immense flank landslides that took place in northern Tenerife.

The discovery is sure to revive discussion of the BBC Horizon documentary Mega[1]Tsunami: Wave of Destruction, first shown in 200. In this famous programme, scientist Simon Day claimed that the collapse of the massive Cumbre Vieja ridge on the island of La Palma could cause a massive tsunami that would cause widespread destruction on the eastern coast of America, where 40 million people live.

Day’s claims have been frequently challenged since, with some claiming that a tsunami was likely to diminish while crossing the Atlantic. But the recent findings certainly show that there is potential for local mega-tsunamis in the Canaries.

The good news is that Cumbre Vieja’s collapse is more likely to be gradual, and there has only been one major flank landslide in recorded history (since 5,000 BC).

Source: Megatsunamis Induced by Volcanic Landslides in the Canary Islands: Age of the Tsunami Deposits and Source Landslides. Geohazard Magazine

While tsunamis remain highly unlikely, anyone on Lanzarote will be able to see the impressive force of tides on the 8th to 9th of this month, when the highest tides of the year will occur in the Canaries.

Named the Mareas del Pino, as they coincide with the feast day of the Virgin of the Pine, these tides signify the end of summer for many Canarians. It’s common to see entire beaches underwater at their height, and, as the tides are also at their lowest, many islanders can be seen collecting seafood from shores that are usually underwater.

These tides are likely to occur on the 8th and 9th of September this year, with the highest tides occurring between 3 and 4 pm.

The son of the sea
Scroll to top