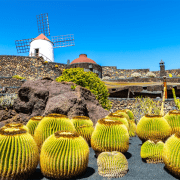 There are six more Canary Islands to discover apart from Lanzarote and La Graciosa, and local authorities are giving interisland tourism a real push this summer while they wait for foreign tourists to come back later in the summer. With flights and ferries back and historically low residents’ discounts available, it’s time to start island-hopping…

From the dunes of Corralejo to the wild strand of Cofete, Fuerteventura is wild and free, a place where pretty villages and stunning beaches are everywhere.

Don’t miss: Betancuria. A small, ancient village tucked away among the silent mountains of Fuerteventura’s interior.

Presided over by the mythical, occasionally snow-capped volcano of Teide, Tenerife offers everything from wild desert to laurel forests and some of the most popular resorts in Europe.

Don’t miss: Puerto de la Cruz. A town whose spa and casino were the birthplace of Canarian tourism, this northern resort has a slightly-faded charm and character all of its own.

A fascinating isle of crumbling crags, winding roads, banana plantations and spectacular valleys with a fairy-tale forest at its heart, La Gomera is unforgettable.

Don’t miss: Agulo. Known as the “bon-bon of the island”, this beautiful village of winding streets and cobblestones nestles beneath immense cliffs and the ocean.

The elegant colonial streets of Santa Cruz are the perfect introduction to an island which offers pine forests, an immense volcanic crater, a 50 year-old volcano and host of wildlife, plants and pleasant towns.

Don’t miss: Roque de los Muchachos: Drive up through pine forests to peaks where the strange, silvery domes of astronomical telescopes give way to jaw-dropping views of the immense volcanic Caldera de Taburiente.

The “mini-continent” where the resorts and dunes of the tourist south soon give way to rural inland charm, soaring crags and prehistoric remains. Gran Canaria is small enough to feel comfortable but large enough to take a lifetime to discover.

Don’t miss: Las Palmas. The capital’s city beach, Las Canteras, is one of the most spectacular in Europe, but there’s so much more to discover, from colonial grandeur to funky shops and fine eating.

Once the most westerly point of civilisation, this strange, wild island has a mystical attraction for those seeking solitude and inspiration.

Don’t miss: La Dehesa. The windswept mountain home of a famous twisted juniper tree and the church from which the Virgen de los Reyes descends every four years for the island’s biggest event.