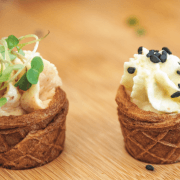 Lanzarote’s biggest culinary event took place at the end of November last year, and was a huge success – building on the achievements of previous editions and establishing the island’s cuisine as a central element of its tourist appeal.

Teguise quickly filled up with hungry crowds, their appetites whetted by the mouth-watering displays and tempting aromas at hundreds of stalls. And they weren’t disappointed. This was a fascinating event – a showcase for Lanzarote’s food and wine, but also a place where flavours from further afield were celebrated.

In the beautiful Casa del Timple there was a Canarian food display, offering delicacies from all seven islands, and elsewhere there was a marquee showcasing Mid-Atlantic food, with spectacular dishes from this year’s specially invited guest, Lisbon.

The 8th annual cooking competition was won by Kevin Díaz, whose Canarian salad won him a trip to European food hotspot San Sebastián to take part in Spain’s national Russian Salad contest – a celebration of one of the nations favourite tapas dishes.

But there was much more on offer, from kids’ cooking classes, music and TV shows to fascinating talks by some of the best chefs on the island. All against a backdrop of hundreds of people enjoying themselves and satisfying their souls with Lanzarote’s finest food and wines.