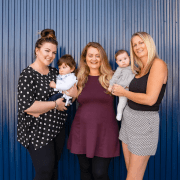 Fortunately, Spain is one of the safest places in the world to give birth. In the first of a new series addressing health issues on Lanzarote, Shaun Addison speaks to three mums who recently got to know the inside of Arrecife’s maternity department about their experiences, options and tips.

Carla Sylvester had her first child Jayden (1) last February in Arrecife’s Doctor José Molina Orosa Hospital just a few weeks after Lydia Duxbury gave birth to her first baby Darian there. Georgina Blake, meanwhile, has had four children in the UK and two in Arrecife – most recently three-month old Amelie.

Georgina, as a woman with experience of giving birth in both countries, how would you compare the experiences?

Georgina: I wouldn’t say either was better or worse, and it depends on the hospital. But even the hospital changes – I was offered Gas and Air when I had Amelie, but it wasn’t available when I had Evan here three years ago.

Carla: I think they introduced it during the week when I had Jayden.

The Spanish system has a reputation for being extremely safe and efficient but perhaps a little no-frills.

Georgina: My last birth in Britain was a home birth, and it was such a good experience that I asked about it for my first child here. They told me that it was possible only if I went private, and at a cost of over €1,000 I decided against that.

How did the fact that you don’t speak much Spanish affect the birth?

Georgina: I was worried, but it turned out better than I imagined. Some of the staff spoke some English, and my partner also helped. But I’d also had children before, so I knew the ropes, really, and that helped a lot.

Lydia, Darian was your first baby, which adds a new level of worry. How did it go?

Lydia: I turned down Gas and Air because I’d heard reports that it “knocks you out”, and I didn’t want that.

Georgina: I didn’t find that. I loved it!

Lydia: My initial problem was with the male midwife. When I arrived and told him my waters had broken he said “No they haven’t”. Then he showed me a list of the costs of each visit, as if he was telling me off. Later, he discovered I was telling the truth, and he turned out to be really nice and helpful.

Did you have an epidural?

Yes, but that was another issue. I was very restless and couldn’t sit still, and they told me they wouldn’t give the epidural unless I kept calm. I felt I was being made to earn it somehow, and that made me nervous. Finally, the midwife came in, looked at me and said “That’s the face I want to see.”

What are the best things about the Spanish system?

Georgina: The prenatal care is wonderful. They carry out all types of tests and scans.

Carla: Yes. I worried a lot while I was pregnant, and went to the hospital several times. But they always had time for me, never made me feel I was wasting their time. I also found the prenatal exercise classes very useful.

And the worst things?

Georgina: Postnatal care. In the UK you’ll get home visits from a midwife, but that’s not normal here. You have to go to them, and when you’ve just given birth that can be a pain.

Lydia: I agree. I saw a midwife who told me I was breast feeding wrong. I was a first time mother, and felt very insecure, so I don’t need to be told off. Again, the relationship improved but I didn’t need that.

Carla: Paperwork is also a pain. You have to register the child pretty quickly, which means you have to go out at a time when you’d just rather be staying in and recovering. This is a particular problem for foreign residents, as babies with a Spanish parent can be registered right at the hospital.

Finally. If you were pregnant again, would you choose to have the baby here or go back home?

Georgina: I’ve already made that choice once. I’m a little worried that the standard of care in the UK is going down and I’d have no trouble choosing to stay here.

Carla: Safety-wise, here is fine. If you want your child to be British, it’s going to be easier in the UK, though. It also depends on your support network – I really missed my mum.

Lydia: I’d have no problem having another baby here.

Birth partner: Arrecife hospital permits one birth partner to be present during the delivery, while several hospitals in the UK allow two. Carla says “If you speak no Spanish, it may be worth considering a birth partner who can translate and calm you.” Georgina says “Learning a few Spanish words, such as ‘pain’ or ‘push’ could be helpful.”

Prenatal hospital visit: Carla says “Be sure to ask for the visit to the maternity ward that is offered to all pregnant women. That really helped me, as I had a better idea of what to expect.”

Supplies: Lydia says “It’s great that they give you a kit of nappies, formula milk and sanitary pads. You don’t have to bring much, but I was glad I’d brought my own pillow”. Carla agrees with the pillow tip and says “Bring a squeezy bottle of water to wash yourself and some big pants.” Georgina, meanwhile, was grateful that her partner smuggled a McDonalds in for her afterwards. “It’s not recommended, but they turn a blind eye”.

Social media: All three mums are members of Facebook and Whatsapp groups, both locally and internationally. “If you know what to expect, it’s a lot easier, says Carla, “Having a close link with mum groups on the island helps you not to feel isolated.” Georgina adds “Things change quickly, so its good to stay up-to-date.”

Epidural: If you decide that you may want an epidural, ask to sign the consent form before your birth.

Spain has the lowest maternal mortality rate in Western Europe, and a lower infant mortality rate than the UK. These statistics are also improving every year, thanks to a rigid focus on what is safest for mother and child. Spain’s approach to Strep B screening highlights that focus.

Streptococcus B bacteria are present in one in four pregnant women and, although chances of infection are rare, unborn and new-born babies are at risk of infection because of their undeveloped immune system.

In the UK, Strep B tests are not available on the NHS and women who want one are advised to book a private test. The NHS has taken this decision to avoid prescribing antibiotics to the 25% of women who test positive.

In Spain, however, the Strep B test is standard during the third trimester of pregnancy. If positive, the mother will be encouraged to enter hospital as early as possible once labour starts, and will given antibiotics.

It’s an example of the comprehensive care given in Spain, which may not always be touchy-feely (home and “natural” births are discouraged), but guarantees maximum safety for baby and mother.

The Canarian Palm
SARA Dogs of the month