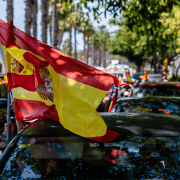 Car protests could be more common in the future, after the far-right Vox party organized “caravans” throughout Spain to protest against Pedro Sánchez’s government.

The caravans tooted their horns, waved Spanish flags and staged go-slows through several Spanish cities. While numbers were fairly small on the Canaries, the protests could show a change in tactics for street protests.

Before the lockdown, Vox held a more orthodox rally in Madrid that was attended by 9,000 people. Three of their leaders fell ill with the coronavirus shortly afterwards.

UK to lift quarantine from 6th July
Scroll to top