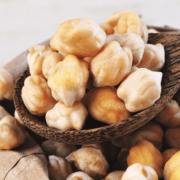 In the second of our guides to local ingredients we focus on the healthy beans and pulses that can be found on Lanzarote.

In Spain, beans and pulses are essential elements of the national cuisine. They’re found in revered dishes such as the Asturian fabada, but also play a part in the most basic of peasant fare in the form of lentils and chickpeas.

Most supermarkets will have a selection of half a dozen or more dried pulses sold in plastic half- kilo bags. They will include lentils, which come in pardo (small and dark brown) or Lanzarote (paler and flatter) styles, and both are equally delicious. Look around and you may also find black caviar lentils.

Chickpeas come in several varieties, with lechoso (large and milky) and pedrosillano (smaller and firmer) standing out. They’re an essential ingredient in several Canarian potajes and stews, and most homes will have a pressure cooker to prepare them quickly and cheaply.

However, it may not be easy to find popular British pulses in Spanish shops. For red lentils and split peas visit a British supplier or an Indian shop, while it’s possible to find mung beans, black-eyed peas and other pulses at many health food shops.

Spanish shoppers prefer to buy their ready-cooked pulses in jars rather than tin cans, and these tall jars can be found in every shop – the perfect last-minute store cupboard ingredient for a fast, nourishing meal. Chickpeas, lentils, alubias and pinto beans are widely available, and are always perfectly cooked and delicious.

Tins may also be available, and if you’re a fan of good old British baked beans, you’ll find those in most stores, as well. Hunt down a Chinese supermarket and you’ll find a wide variety of black and red beans, dried, fermented, in jars or frozen edamame beans (all soya variants).

The snack aisle is another place to find legumes. The Spanish are hugely fond of peanuts, but also like habas fritas (fried broad beans) and chickpea snacks. Finally, the freezers will contain freshly frozen peas, broad beans and runner beans.

Fresh beans are often found in the vegetable section, with the most popular by far being habichuelas (runner beans). The high price reflects the value that Spanish cooks place on these vegetables, rather than scarcity.

You may also find flat varieties of runner beans and fresh peas on sale, depending on the season.

One local product that you won’t find in the UK is altramuces, the seeds of the lupin flower, also known here as chochos.

In Britain, lupins are strictly ornamental, but in the Mediterranean and South America their nourishing seeds are a perennially popular snack. After being soaked in brine for several days, the seeds are packed and sold. They are eaten by tearing the skin and popping the seed into the mouth.

Also known in Italian as lupini, altramuces have recently been hailed as a new superfood and are one of the most on-trend new power snacks in parts of the world where that sort of things is important. We say give them a go, but don’t expect too much.

Recipe of the Month: Green Mashed Potatoes
Scroll to top