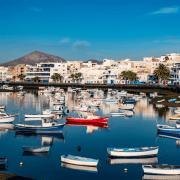 One of the most astonishing aspects of the lockdown was the chance to see our cities virtually empty of cars. It’s a vision many of us don’t want to lose sight of, writes Shaun Addison.

When we were permitted to leave the house to exercise I started jogging one of my usual routes, along the Arrecife Marina. I ran there four times a week until we entered Phase 2, which allowed larger restaurants to open. That included the drive-in Burger King at the Marina.

Immediately there was a queue of cars, running their motors by the sea wall and patiently waiting for their Whoppers. After weeks of pure air, you could taste the exhaust fumes and I began to wish I had put a mask on. Now I run a different route.

Living in Arrecife I was also disappointed when traffic returned to the capital’s seafront last year. It’s a route I refuse to drive myself, simply because I realise that my vehicle is a pollutant, and Ive gulped down those fumes while having a coffee or a pizza myself. Reopening the road was a step backward for a town that had finally taken some promising steps forward.

The lockdown only highlights how quickly we’re going to have to grow up when it comes to motors. There’s a misguided belief that, because Arrecife is a breezy seaside city, pollution is quickly dissipated. It’s not true, according to figures from the meteorological agency that placed it among the most polluted towns of its size in the Canaries.

Of course, I understand the disadvantages of barring traffic. Public transport still leaves much to be desired here (although Arrecife’s shuttle bus is a great idea) and affordable parking has not been addressed by successive councils. There still need to be places for residents, taxis, delivery vehicles and emergency vehicles to drive.

But the empty streets of the lockdown and the busy cycle lanes and pavements during the 8-11 exercise slots are what our future is more and more likely to resemble, and while I never want to see another lockdown in my life – that was one of the parts of it I’d love to keep.