The Castillo de San José perches on a rocky outcrop overlooking Lanzarote’s busy commercial port. Once the most important military building on the island, it is now home to the MIAC (International Museum of Contemporary Art), one of the island’s seven centres of art, culture and tourism created by César Manrique. Last month, the museum’s director, María José Alcántara, took time to show us around Lanzarote’s most important collection of modern art. 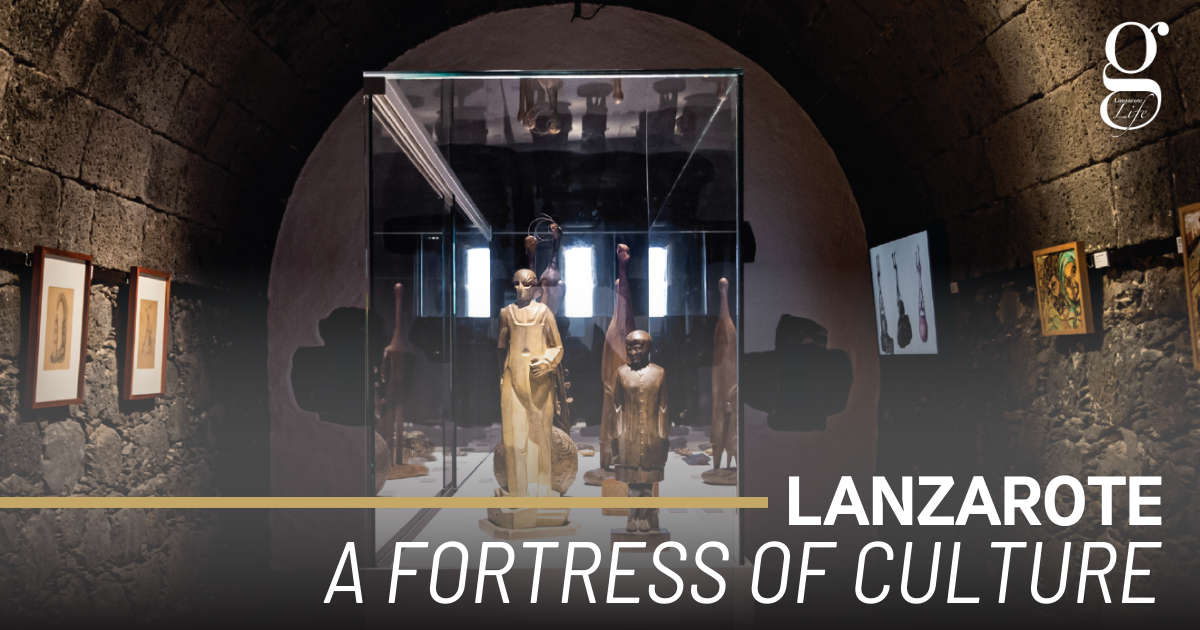 The museum was established in1975 under the personal direction of Manrique. A year later, and 200 years after the first stone of the castle had been laid, it was opened to the public with a spectacular exhibition featuring artists such as Picasso, Miró, Francis Bacon and Henry Moore.

Many of the works at that show form the backbone of the permanent collection ondisplay today, after the island’s Cabildo made a huge investment in artworks by notable modern artists, creating one of the finest collections of late 20th-century art in the Canaries.

The castle building itself has hardly changed – large, starkly-decorated halls and chambers form the perfect setting for the abstract works of art. It’s possible to climb up an old stone staircase to the roof and battlements of the castle.

Just off the main hall is the Canarian Art room, featuring works by artists from the islands including Manrique’s close friend Pepe Dámaso – his work incorporates a piece of fabric that the two discovered while on a walk together.

The Pancho Lasso room houses works by a Lanzarote artist that María José shows special interest in. “Pancho Lasso was hugely talented,” she tells us. “He was the son of a carpenter and trained as a barber but showed such artistic skill that the Cabildo offered him a grant to study in Madrid.” The works in the museum back up her claim. Lasso’s work shows influences from social realism and art deco to cubism and surrealism.

The museum’s collection has grown, especially with photography which “wasn’t considered so much as art back then” according to María José.

A tunnel leading down to the restaurant is unmistakably Manrique in style, all soft curves, white walls, raw volcanic rock, and those quirky little details, such as lampshades made of wooden salad bowls. “They blasted this with dynamite,” smiles María José, aware that this would never be permitted today.

The restaurant itself is dominated by another Manrique trademark – an immense window that overlooks the gardens of the castle and the glittering blue seas of the harbour. This is the first Michelin five-fork rated restaurant on the island, and the centre for many culinary events on the island.

Overlooking the spectacular view, I ask María José about Jason de Caires’ work The Rising Tide, which saw sculptures of horses with oil-rig heads rising and sinking in the tide at the foot of the castle twice a day. “That decision was politics”, she says, “But I thought it certainly drew attention to the castle.”

César Manrique’s work is so prominent on Lanzarote that there are sometimes complaints that his presence stifles the work of new, younger artists. María José knew and worked with him and says “He would never have wanted that. He wanted young people to do things and create. All artists are a bit egotistical, and César loved attention, but he was generous and open.”

The museum held regular exhibitions until the pandemic started, when cultural budgets were slashed to fund social issues, but María José has plans to restart these. She also has much bigger ambitions for the castle.

“I’d like to see the entire museum extended underground, which would increase the available space immensely,” she tells me. “There’d be space for more exhibitions, auditoriums and educational facilities.” Plans have already been drawn up for this project, but the problem, as always, is money.

I ask if she’d be interested in a virtual tour, such as the ones other museums have placed online, but she’s not keen on the idea. “Art is something you need to be present for. Looking at Velasquez’ Las Meninas in Madrid on a screen will never be the same as standing in front of it.

María José remains optimistic about the future of places like the MIAC, though. “Things are changing, and culture and art are becoming more important than ever,” she says.