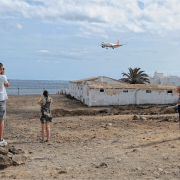 Dave Burton and his partner were enjoying their holiday on Lanzarote when the lockdown happened, and the couple were among the last departures from Lanzarote before the island went into total lockdown. Shay Rourke spoke to him.

You were holidaying here before the likelihood of a countrywide lockdown was announced. That must have been an uncertain time?

Our feelings changed quite dramatically; we had been apprehensive before the holiday as we dreaded it would have been cancelled due to the virus. But at that time it was a small story.

We had jokingly listed which hotels we could camp in if we had to stay on for a couple of days. However, things suddenly became very real when we were told not to leave our hotel room unless it was for food or exercise.

No one expected the virus to bring the world to a standstill. What was the feeling amongst other holidaymakers?

We all expected it was a minor blip and we’d be back on our way home soon enough, despite the panic in the UK. The feeling from the residents seemed similar. We got talking to a waiter, he seemed to shrug off any concerns saying, “Lanzarote has different laws”. He wasn’t concerned whatsoever!

One of the photos you’ve submitted is of a plane taking off. When was this? Was the airport busy at this time?

The picture was taken on the first day of the lockdown, the 14th. The planes just kept coming in. At one point there were six planes taking off one after another with 2-minute intervals.

Could you see the lockdown beginning to take effect?

There was a feeling of change when I walked down to the seafront, no one on the beaches (apart from a keen swimmer taking his chances), restaurants shutting and local police taping off commercial streets.

When it was your time to fly home, was the airport busy?

It was crammed! The busiest I have ever seen it. The use of masks had started to pick up, but they were still the minority. Other than some tourists choosing to wear masks, there were no safety measures at all. Tensions were high in the queues with plenty of impatient passengers desperate to go home. The airport wasn’t short of arguments, that’s for sure!

We all had to wait our turn to fly, ours took a very tiring 36 hours. There were three flights with our carrier, and we were on the last one. We were lucky, though. Some flights were being cancelled as we waited in the airport.

Was your flight empty or full?

The flight was around midday and was full. In the end it was just a normal scheduled flight out of Lanzarote, albeit the last one. We were both relieved and saddened to step on onto the plane and watch Lanzarote get smaller as we ascended into the clouds.

Despite all of this, we will continue to come back to Lanzarote year on year. We’ve got a week booked at the beginning of September and we’re keeping our fingers firmly crossed.

Virtual circuit of Lanzarote
Back to School

Get outside to stay healthy
Scroll to top