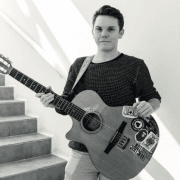 Connor James is an incredibly talented singer, guitarist and songwriter. Julie Helliwell chatted with him about his musical background and what the future holds.

How long have you lived on Lanzarote?

I’ve lived here for 17 years. I was born in Kent but we moved here when I wasthreebecausemyparentswere getting into property management and decided to do it here.

How did you get into music?

I got my first guitar when I was eight. It was a really bad one and didn’t stay in tune, but I taught myself to play Wonderwall, as everyone does! When I was ten, I saw Ed Sheeran and I wanted to do what he did. My Dad bought me a €50 guitar and I played that for about three years. It just shows that you don’t have to spend lots of money to get started.

I started writing songs at a really early age too. I think it’s a really expressive art. You can get your emotions out, and I think words are the purest way of doing that. I write in English and Spanish. I find that rhyming makes more sense in English, but the words sound more romantic in Spanish.

Are you working on anything now?

I’m writing and producing my own stuff in my studio and I’m almost ready to release an EP of 5 songs called ‘The Island’. I’m a bit of a perfectionist though, and I keep tweaking the songs. It’s sometimes a case of “you stare at your art until you hate it”. I just need to master them and get the balance right, but I’m holding myself back as it’s a bit daunting to share personal lyrics. I have played some of my own songs at gigs though, and the crowds have enjoyed them.

How many songs can you sing?

I’ve got about 450 songs on my tablet. I love improvising, and when people ask me to play something new, if I know the song, I’ll look up the chords and have a go. I use a guitar and loop pedal. I can produce a bass drum and snare sound on the guitar, loop them and play and sing over the top. I don’t have a fixed set list – it depends on what I think the audience will like, or what I enjoy playing. No-one can guess what I’ll do next and I really like that.

When and where was your first gig?

My first gig was in a bar called La AvenidainPuertodelCarmen three years ago. I was very nervous and it was quite formal as it was in a restaurant. I prefer bar gigs because I’m loud and have high energy.

In the beginning I had anxiety and my family have really pushed and supported me. My brother said, “If you don’t do it now, you’ll always regret it”, and I’m really glad I continued, as music is my passion. I missed opportunities due to anxiety in the past, and a simple message I’d give to anyone starting out would be, “Push yourself and go for it”. I’m proud of myself as I never thought I’d get over it, but you have to adapt. It might take a while, but you do.

What’s been the best musical experience you’ve ever had?

For my 18th birthday, my mum took me on holiday. One night, we stayed in the Hard Rock Hotel. My mum secretly spoke with the entertainment manager to ask if I could play. They called me down, gave me a guitar and told me to get on with it! They didn’t even introduce me!

I can remember exactly what songs I played and the biggest compliment afterwards was when the bar staff said that they thought I was the new entertainer!

What does the future hold?

I’m going to release my music. I don’t want to be rich; I just want to make a living. By March, I will definitely have a track out, and I will continue writing songs. I plan to stay here for the foreseeable future, but I might use it as a base and travel around Spain, playing in bars and meeting people.

The bright side of life

The world is your office

From Tiffin to Thalis

The Social Network
The Irish Connection

Now’s the time?
Scroll to top