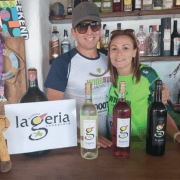 Sarah Curtis and her gang love the annual Lanzarote Wine Run in La Geria. So when this year’s race was cancelled due to Covid-19, she decided to host her own unofficial Wine Run! Shay Rourke spoke to her.

What was your reaction to the official Wine Run being cancelled?

We were gutted. We usually do the run with my parents as it tends to coincide with Father’s Day in the UK. A big crowd of us from Costa Teguise and Tahiche join in, either trekking or running. Our friend Jude even used it for her Hen Do last year!

Was it hard to set up your own version of the race?

Not really. I’m one of those annoying organised people that loves paperwork and sorting things out! First, I sorted supplies from previous years, such as bags, t-shirts and plastic glasses. Then I planned the stops at the various houses, where each couple chose a different wine for their stop.

My sister and I put the bags together and she printed all the numbers out. On the Friday we all met at the starting line in Las Cabreras and dished out the bags. My parents hosted the ‘finishing line” and all the couples supplied food to be eaten afterwards.

What wines did you choose for the run?

At the number collection we had Bermejo. During the trek there was La Geria, Jameo, El Grifo, Vega de Yuca and, finally, the delicious beer at Los Aljibes.

The beer was a bonus, as Gavin from Los Aljibes was one of the participants. We usually ransack their stand at the actual festival in Uga!

Did a camel accompany you, as it does in the official Wine Run?

The camel is an essential part of the Wine Run every year, so there had to be one. This one was a lovely little stuffed one called Camila that was small enough to carry.

How did it go?

It was a really great experience. We had loads of fun as well as a 14k trek! Luckily for me the locals of Tahiche are used to us doing wacky things and didn’t flinch too much at us drinking wine through the village at 11 am in the morning!

Will you hold your own Wine Run next year?

I think we will be giving it another go. But we will, of course, be going to the actual event, too. It’s always in the diary as soon as the date is confirmed.

Three Clubs And a Putter
Scroll to top