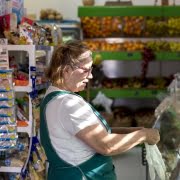 “Working close to the soil, with love, care and respect.”

Soo is one of Lanzarote’s most unique and traditional villages. Perched on the edge of the sandy desert region known as El Jable, it’s still a place where some of the best, freshest agricultural produce on Lanzarote can be found.

On the high street, Lourdes Curbelo has run the shop that bears her name, La Tienda de Lourdes, for 40 years. It was passed on to her by her mother- in-law, and is one of the island’s best surviving examples of the village general store; a tradition which has been hugely affected by the arrival of supermarkets.

There’s no supermarket in Soo, however. Just Lourdes, and her shop sells a little of everything that locals might need. Most important, however, is the local produce – big sacks full of locally grown lentils and beans, fresh potatoes from Los Valles, bright red chillies, sweet potatoes and melons that thrive in the sandy local soil.

Lourdes weighs all of them out on her 70-year old vintage set of Campeona scales. Like many older Lanzarote islanders, she knows exactly what goes into the production of the food she sells, having helped her father out working in the fields when she was a little girl.

“On Christmas Day or New Years Day I might sleep a little later, until 9am for example,” she says, “But normally I’m up at 6.45 every day.” Lourdes will also keep the shop open until 10pm to allow local customers who work late to grab something on the way home.

Thanks to, Turismo Lanzarote.

For more information about the Humans of Lanzarote project, click here.

Eye in the sky
Spotlight on: Colleen Meje

Face to Face: Mayor of Yaiza
Scroll to top