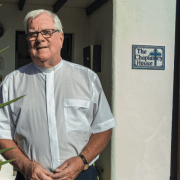 The Reverend Stan Evans and his wife Rosemary arrived on Lanzarote eight months ago, as Stan moved into the Chaplaincy House in Puerto del Carmen to end the interregnum in the Anglican church on Lanzarote. A hugely enthusiastic man with rich and vital life experience, Stan’s influence is already being felt.

Good morning Father? Reverend? What exactly do I call you?

Do you wear your dog collar all the time?

Not always, but I like to wear it. It’s not compulsory outside of official situations, and there is a tendency these days to hide the collar, but I have a task to do; I’m excited about it and I don’t want to hide that.

Could you remind us about what the Anglican church on Lanzarote does?

It was set up in the mid-90s, I believe, and is a part of the greater parish of St Laurence in Spain. The church has established close working links with the Catholic Church here and has become an important resource for resident expats, the “swallows” who live here in the winter and tourists of all denominations and faiths.

So, you don’t have to be Church of England to attend or join in.

No, I think it’s important that we reach out. Our job is to welcome people who are looking for peace and send them away refreshed. We see people of all faiths in our congregations – I think many of them just want to sit in a sacred space.

As an Anglican priest I can wear a wedding ring as well as a dog collar. I’m married to Rosemary, who is my rock, and have children as well as grandchildren. I think that gives a universal experience and understanding that is vital for my profession.

Can you tell us a little bit about how you came to the church?

My step of faith came late, in my late 30s, when I accepted a job as appeal manager with the Church of England’s Children’s Society. That took me to Yorkshire, just after the miners’ strike when Margaret Thatcher and Arthur Scargill went toe-to-toe.

I did a lot of work in inner cities and deprived communities, and was approached by David Hope, the Bishop of Wakefield. The Church was right at the nub of things at that time, we were visiting and identifying areas of need, raising millions of pounds. It was exciting, and even more so when I was given a national role, working in the UK and Ireland from Westminster. I was there when Robert Runcie launched the Faith in the City initiative.

I spent several years in Ireland, where I was ordained in 2003. I’ve worked in areas where there have been high times and sad times, but it’s always been the greatest privilege.

Yes, I’m the Chair of the Executive of the Niños del Tercer Mundo charity, which I think is an incredible project and an important link to the wider world.

How did you come to Lanzarote?

I suffered a health scare last year, and I’d been thinking of looking for a place in the sun for a while. We booked a holiday here and then a friend told me that Lanzarote was looking for a reverend. We came and fell in love at first sight.

What were your first impressions?

It was spotless. Rosemary was worried – we have children and grandchildren, and it’s a long way away, but when we got here, she said “This is fantastic”. And we’re in touch with the family more than ever thanks to the iPad!

You have strong Irish links. Have they been helpful here?

Very much so. The Irish love this island, and I’ve already been visited by several ex-parishioners.

Is it hard work?

I’m supposed to work three and a half days a week, but it seems more like eight! For example, this Sunday I have a mass at Puerto del Carmen at 12.30, then a funeral at 2.30 before I go down to Playa Blanca for the 5pm mass there. That all has to be prepared for, then there’s other preparations – I’ve blessed 21 weddings so far this year, and there’s pastoral care – a lot of people are anxious about Brexit. I have to be prepared for anything – for example, when the young Irish lad died here earlier this year, we gave his family a lot of support and, I hope, solace.

What do you hope to achieve here on Lanzarote, Stan?

There are specific things, of course: I think there’s a need for chaplaincy in the hospitals, for example, and it’s good to have worked with both the British and Irish consulates. I’m also one of the clergy who supports same-sex unions and, while we have to be respectful of the local church, it’s something I’ll be supporting at Synod.

More generally, I’d like to bring hope, and I feel blessed to put a plan together for the next four or five years of my ministry. It’s an immense privilege.

Eye in the sky
Spotlight on: Gerie B

Whose Pet Is It Anyways?
Scroll to top