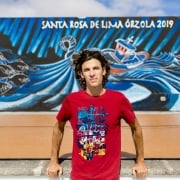 Alex Dorta is a young artist who lives and works in Tabayesco. Born the youngest of six in Arrecife, he studied at the island’s Pancho Lasso art school, following in the footsteps of two of his elder brothers and thousands of other young islanders. The creative legacy of the school named after one of César Manrique’s most important mentors has defined his career and his passion.

Alex works in all kinds of artistic work, designing murals, stage sets and floats for carnival parades. His gift for drawing is shared with and passed on by his two brothers. But each year, on the longest day of the year, Alex transforms into one of the Devils of Haría, a tradition invented by his older brothers Reinaldo, Ramón and friends in the 1990s. San Juan is Spain’s bonfire night and its midsummer festival, when friends and family gather round a fire to eat, sing and have fun.

But on this occasion, the young artists planned to do something special. On the night in question, the usual speech was made but the fire was not lit.

Instead, shaggy horned devils emerged from the darkness, climbing down from roofs and palm trees or clambering out of holes carrying flares with which they lit the fire while dancing wildly. The spectacle was so impressive it has become a regular San Juan event in Haría.

“I get goosebumps when I hear that dog-howling sound in the silent village,” says Alex “It’s like being the star of a really cool film.”

Alex loves living in the north of Lanzarote “It’s still a bit wild here,” he says. “I’ve been away; I lived in Madrid for a while, and those journeys make you realise where you want to be.”

Thanks to, Turismo Lanzarote.

For more information about the Humans of Lanzarote project, click here.

Eye in the sky
Spotlight On: Adrian Bambrough