Lanzarote’s César Manrique Airport is one of the island’s most important employers, with hundreds of staff visible at any given time. But there are ten workers who passengers rarely get to see – one man, eight falcons and an eagle who keep the airport grounds safer for passengers every single day. 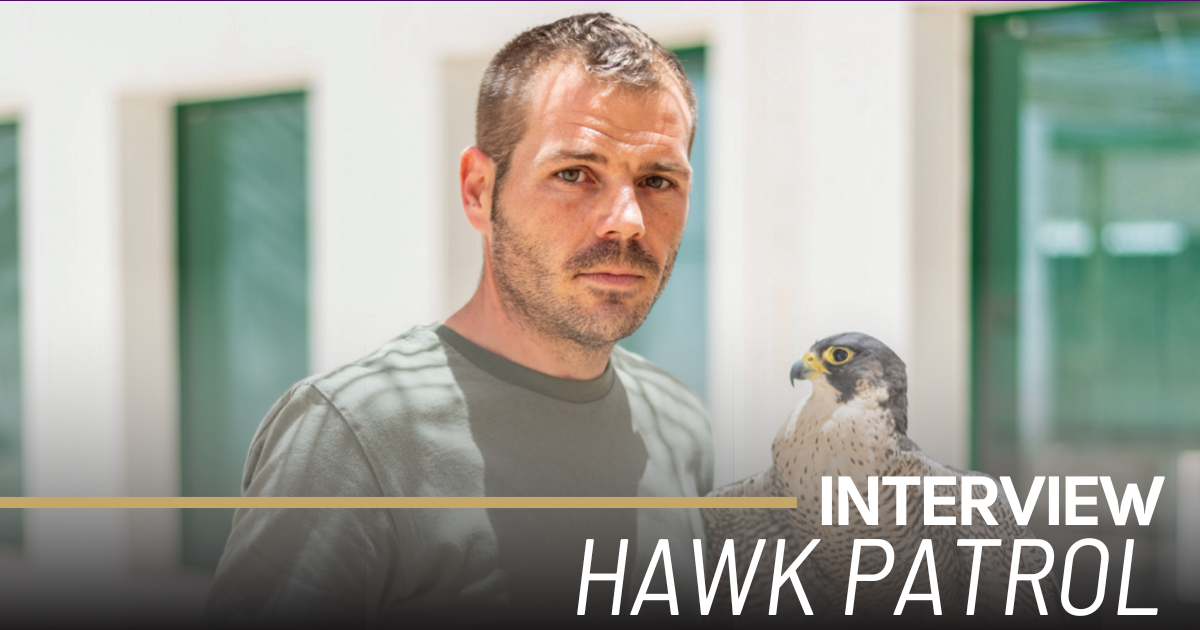 Lanzarote Airport’s Fauna Control Centre is based in a small building on the far edge of the airport grounds, close enough to the airport’s runway so that our words are drowned out by engine noise every so often. However, the nine hawks at the Fauna Control Centre are well used to the racket, perched on small posts to which they are tethered by leather straps. Some of the birds are unhooded, while the ones that are more prone to be nervous by our presence wear small hoods that block their vision and instantly calm them.

The peregrine falcons are perhaps the most striking of the hawks, with their gorgeous black-and-white barred chest plumage and yellow-ringed eyes. This bird is the fastest animal on the surface of the earth, and can reach up to 300 kms an hour when diving. At Lanzarote Airport there is a male peregrine called 22, and two females, Timanfaya and Atmosfera.

The Saker falcons are larger and similarly-coloured – a male named Rubio and a female, Troglodita. Then there are the Harris’s Hawks, larger falcons whose wings are a deep chestnut shade. Unlike the peregrines and sakers, these hawks aren’t native to Europe and come from central and South America. The birds at Lanzarote are a male, Unicornio, and two females Briana and Pandora.

Finally, alone in a large separate cage, and making a lot of noise, is Alaíz, a large and imposing golden eagle. All these birds are handled, cared for and adored by Steven Mountain, the falconer at the airport, who says “This isn’t just a job, it’s a passion.”

Although the unit at Lanzarote has existed since 2005, these birds have been here for just two years, and were acquired from a specialist breeder on mainland Spain.

Since then, they have successfully bred one chick at the unit.

Steven takes one of the birds out first thing every morning and once again later in the evening, when they follow a well-rehearsed route around the airport grounds. The lighter, agile peregrines love to ride thermal currents of hot air up into the sky, and to avoid this they are usually used in the morning when the air is cooler. The heavier birds get their turn later in the day

The main risk of bird strikes at Lanzarote comes from seagulls, and keeping them away is also one of the reasons why fishing boats are prohibited in the sea near the airport. However, the falcons also keep pigeons away, and other local birds of prey such as kestrels are also deterred by these much larger predators.

The main aim of the daily flights is deterrence – one glimpse of a predator and other birds tend to make themselves scarce and flee. Mostly, the birds fly to mark this territory, but they are not tame animals, and if they see a bird, they will hunt and, perhaps, kill.

Steven calls the birds back with a whistle and by swinging a lure. Occasionally, and especially when a hunt has happened, a bird will not return, but Steven doesn’t worry. Each bird is fitted with a GPS tracker, which means he can locate it easily. The airport is their territory, and they do not leave.

Steven has one colleague, who takes over when he’s not working, but this is a specialist job and there is a strong link between the falconer and the hawk, a bond of trust which takes a long time to establish.

Recently, there have been reports that the falcons at many Spanish airports could be replaced by drones. However, Steven isn’t worried “They don’t work,” he says.

When a plane hits a bird at high speed, it can be disastrous for both. Bird strikes have been a serious hazard since the beginning of aviation – Orville Wright hit a bird on the second ever manned flight in 1905. Globally, bird strikes cost over a billion euros a year, have caused several major accidents and have killed more than 200 people since 1988.

In the 1960s, European airports began to experiment, using birds of prey to deter birds from airports. The Spanish naturalist and TV presenter Félix Rodríguez de la Fuente was among those responsible for setting up the first falconry units in Spain, and Fauna Control Units that use falcons are now present at more than 95% of Spanish airports.

Working toward a better Tías
The Toughest Challenge