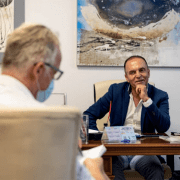 Tinajo is the third-largest municipality on Lanzarote, but the second least-populated, with just 6,279 residents at the last census. Stretching from the volcanoes of Timanfaya in the west to the sandy desert region of El Jable in the east; from the wild coastline of the north to the wine fields of La Geria in the south, it’s perhaps the most typically “Lanzarote” of all the municipalities.

Jesús “Suso” Machín, the longest-standing Mayor on the island, has been in charge of Tinajo since 2001, winning five terms on the trot with outright majorities. His Coalición Canarias party regularly polls as many votes as all its rivals put together.

What does the economy of Tinajo rely on?

Like everywhere else on the island, tourism is hugely important. We contain the mountains of Timanfaya and the complex at La Santa, as well as many smaller attractions.

Agriculture is also important in this municipality. We have some of the most important farms on the island, and we’re the biggest producer of grapes, with 65 of the island’s crop coming from vineyards in Tinajo, and several bodegas that include those of Guiguan, Los Perdomo, La Morro, El Morro, and others.

What does the cancellation of this month’s Romería de los Dolores mean for Tinajo?

It’s a huge blow. This is the biggest cultural event on the island, unique in the world, and although its cancellation means we’ll save some funds, it also means we’ll lose opportunities for investment and regeneration.

Will any events take place at all?

The church will honour the virgin as usual, but she won’t be taken outside the church. Also, many make their journey to Mancha Blanca to request something from the virgin. Those requests will still be possible, but people are being asked to spread them throughout the month of September.

When do you think we’ll see the island’s cultural life get back to normal?

Not before the end of this year, I’m afraid, thanks to this damn virus.

How has the coronavirus affected the municipality?

We’ve had one death; a local woman who was an accomplished craftswoman. We mourn her and hope she has gone to a better place. We’ve also had a few cases, always involving someone bringing the virus from elsewhere. But the impact is also economical.

Here at Tinajo we were the first ruling group to lower our salaries so that more money went towards social care at this time. We’ve also given out free masks when they were hard to get hold of, and paid for tests on all council staff and workers.

The cemeteries have also been closed because of the virus, and so we’ve undertaken the task of going in and laying fresh flowers. That, I think, is important.

Your party, the Coalición Canaria, recently lost control of the Canarian government, Lanzarote’s Cabildo and several more seats of power. How will this power shift affect your rule?

I don’t think it will. People seem to be pleased with how I run things and I think I’ve won the trust of the people by looking after those who are the least privileged.

When it comes to negotiating with other parties, then everybody will take their own sardine to the grill as usual, but we can usually reach a consensus.

How did you get involved in politics?

I started in the late 80s when I was at the side of my predecessor, Luis Perdomo. He was a great politician and I learned a lot at his side, before I was elected myself in 2001.

What are the most memorable moments you have from almost 20 years as mayor of Tinajo?

The achievement I’m proudest of is ensuring that no construction has taken place on La Isleta. That was a long fight, but it’s a place I love and I’m glad it’s still unspoilt.

The worst moment was when a young girl ran into the road and was killed by a car during the San Roque fiestas. That was a terrible day.