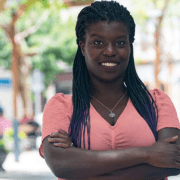 On Sunday 14th June, a group of supporters gathered in Arrecife’s Calle Real to demonstrate in support of the Black Lives Matter protests in the USA. That demonstration was led by 26-year-old local activist and artist Laura Balde Ejjar

Tell us about your background, Laura

I was born in Madrid but came to live in Lanzarote when I was eight, and went to school at the Adolfo Topham Institute in Arrecife. My mother is from Morocco and my father is from Guinea Bissau.

I studied and taught dance, and have worked in Madrid and Málaga, but here on the Canaries the only way to make a living doing that is to be a hotel animator or be famous (laughs). I became interested in activism a few years ago and have demonstrated against issues such as the deaths of refugees in the Mediterranean and the Foreigners’ Law in Spain.

Why did you organise the demonstration?

I’m a member of a platform called the Community of African and AfroDescendents in Spain, and was helped by other members in Las Palmas, Tenerife and Fuerteventura. The demo was in solidarity with the global protests against the killing of George Floyd, but also a wider protest against institutional racism around the world as well as closer to home. It was absolutely peaceful and law-abiding, and although we didn’t have much time to publicise it, the response was good.

What forms does racism take here?

Black people are seen as drug dealers or prostitutes, and those attitudes are reflected in employment figures. Poverty is a problem you only have to look at Arrecife to see the type of neighbourhoods where blacks and latinos live. Black people also get stopped by the police far more often than whites. I get asked for my DNI regularly and I grew up here. Its not as heavy as it is in the US, but it exists.

Nevertheless, there was the Fonseca Case in 2000, when an Equatoguinean man died suspiciously in police custody in Arrecife.

Antonio Fonseca was a friend of my family and I remember how that case shocked the community on Lanzarote.

There’s more to it than anti-black racism, though, isn’t there?

Yes, there’s prejudice against Moroccans, South Americans, gypsies, Asians and others. We’ll support and stand alongside any victims. We’re not anti-white – my boyfriend’s white and anyone’s welcome to support us.

What plans do you have for the future?

We’re thinking of organising another demonstration on July 25th to celebrate the Day of Women of African Descent, and I’m heading to Madrid to try and set up our platform officially on a national basis. But my real dream is to set up a multicultural centre in Argana Alta, Arrecife. That’s where I grew up, along with people from 52 nationalities, and the lack of opportunities for young people there makes me really sad. Children are much more empathetic than adults, and that’s where hope lies.

What do you do in your spare time?

I like to go to Caleta de Caballo in the north, just turn off and meditate. I live for travel, too, but the virus has put that on hold.